Today Apple announced the launch of the Apple Watch Series 3 with LTE data, along with the new iPhone 8, iPhone 8 Plus, and iPhone X. The most interesting feature with this new watch is that you won’t need to pair the watch with an iPhone. Instead, it will have a standalone LTE modem for wireless data. That means no more tethering of the phone or the cell phone plan.

The Apple Watch Series 3 will be available on Sept 22nd but you can start ordering it already on the 15th of September.

In order to get standalone data, the Apple Watch Series 3 uses an emerging technology called eSIM. eSIM is the new kid in town when it comes to connectivity. eSIM stands for “embedded SIM”. It’s a standardized SIM chip open to multiple mobile operators, which can be programmed and activated remotely. One of the perks of having an eSIM is that you won’t have to swap it out when you switch carrier. Other advantages are described in What is eSIM and How it’s a Game Changer for Consumers.

So, the Apple’s smartwatch will dial up the internet wirelessly even when it’s not connected to an iPhone. The SIM chip is built into the device, at the time of production, so you won’t need to insert a traditional SIM card. And, as mentioned, an eSIM can be set up remotely, over the internet, without a visit to a store.

Samsung’s Gear S3 Frontier was the first eSIM device on the market. The adoption has had a slow start since it requires a different device setup. The eSIM is in less 1% of all mobile phones and automotive devices.

The Apple Watch Series 3 will come in several new colors, as visible in the main image on top. It will sport new bands and new finishes to fit every type of customer. The watch itself has the same general design as the current Apple Watch. However, it has a bright red Digital Crown as a distinct new feature. Series 3 is 70% faster thanks to a new processor and it will support GPS, like its predecessors. 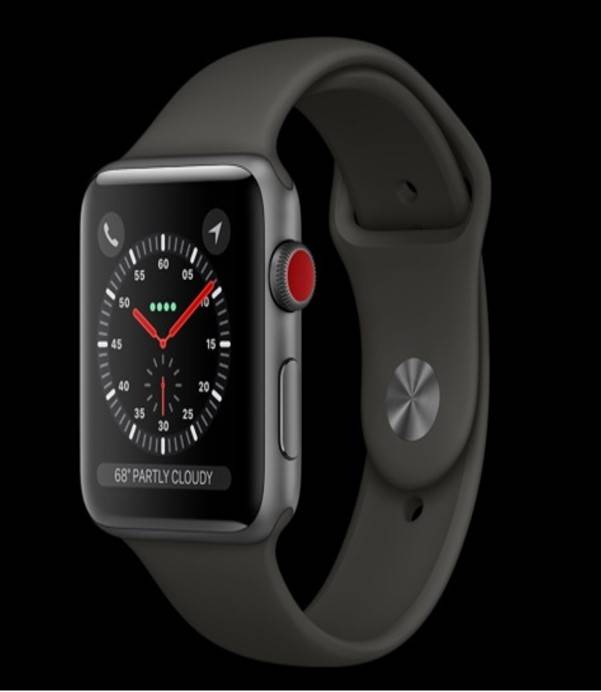 Another new cool feature is that you’ll be able to listen to 40 million songs from your wrist. You’ll basically be able to access to all your favorite music from your watch. You can even ask Siri to find your favorite track. Siri also talks, so you don’t even have to look at the watch.

Not surprisingly, the new Apple watch still doesn’t support Android. Another feature missing in the new watch is support for phone calls. Apple will turn off calling features inside its Apple Watch and will only allow the cellular connection to be used to connect to the Internet. A theory, why they’re doing this is to not cannibalize on the smartphones they launched simultaneously today.

However, if you’re still not convinced about buying Apple’s new watch and is opting for another brand, check out SIM cards for watches.