How Inflight WiFi Determines Which Airline We Choose 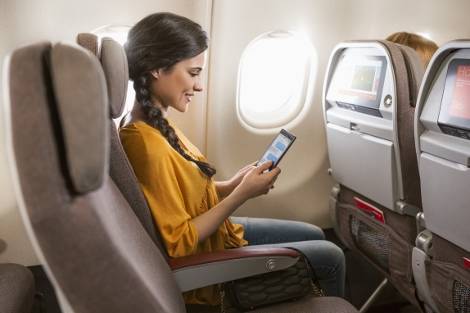 Inflight Wi-Fi has come a long way since its introduction a decade ago. In fact, it’s now one of the top three considerations when choosing an airline. Ticket price and schedules are still the most important factors but inflight WiFi ends up in third place. It’s clear that inflight broadband is changing the airline industry by revolutionizing the onboard experience.

Getting Internet in the Air

There are two ways for equipping planes with WiFi; either via cell towers or by using satellites. Ground-based cell towers, which was the first method of delivering inflight WFi, are similar to the towers that deliver cell phone connectivity.

Cell towers were the first to power WiFi. Instead of pointing to the ground, the towers project wireless service by pointing toward the sky. By pointing upward, the coverage area will be bigger the higher up in the sky (picture an upside-down cone) and planes flying overhead get WiFi. In order to get WiFi through satellites, the plans have an antenna on top of the plane which communicates with the satellite. Satellite-powered service allows planes to provide faster service and can also be used over water. Due to this, more and more airlines are adopting satellite-driven WiFi.

The most common usage of internet onboard is general web browsing on news sites and similar. Also, Facebook status updates, messaging and shopping sites are popular, along with streaming services like Netflix and Spotify. When it comes to downloading content, it’s more frequent on long-haul flights. It needs to be said though that WiFi in the air can still be considered slow with speeds between 9 to 20 Mbps, to be compared to in-home WiFi reaching speeds close to 500 Mbps.

Even as downloading content is likely to be more popular on long-haul routes than short-haul, it’s one of the biggest challenges the airlines will need to face. If everyone on a plane wants to download multiple movies during a 12-hour flight, bandwidth is bound to run out. It remains to be seen how technology and spectrum will be able to tackle this problem, both on the ground and in the air.

The Tipping Point of Inflight WiFi

So when will this phenomenon reach a tipping point? More than 70 airlines offer in-flight Wi-Fi, and most carriers are upgrading their technology to meet consumer demand for faster speeds and better reliability. As of January 2017, 39% of available seat miles worldwide have at least a chance of WiFi on board, according to RouteHappy. This is an 8% increase from 2016, and it’s projected to grow rapidly the next few years.

Inmarsat made a passenger survey on in-air Internet and the results are pretty telling:

An overwhelming amount of passengers now regards inflight WiFi a necessity rather than a luxury. Now passengers even expect the same levels of connectivity whilst in the sky as on the ground. The good news? Juniper research projects that more than half the world’s commercial aviation fleet will be equipped with it by 2022.

If you’ve made it this far in this post, we hope you’ve checked out our global inflight WiFi plan that works on the major American airlines, as well as internationally.

One thought on “How Inflight WiFi Determines Which Airline We Choose”